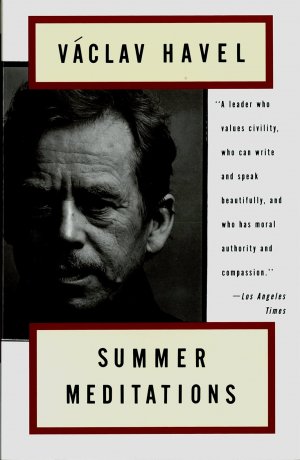 In a book written while he was president of Czechoslovakia, Vaclav Havel combines the same powerful eloquence, moral passion, and abiding wisdom that informed his writing as a dissident and playwright, with a candor unprecedented from one with the broad perspective and infinite responsibility of governing a country.

Havel addresses the legacy of Communism as the euphoria of the Velvet Revolution gives way to a more problematic reality. Yet even as he grapples with the challenges of political change, he affirms his belief in a politics motivated by moral responsibility; in an economy tempered by compassion; and in the central roles of art and culture in the transformation of society. Summer Meditations is not only a timely and necessary testament of events in Eastern Europe but a profound reflection upon the nature and practice of politics and a stirring call for morality, civility, and openness in public life throughout the world.