A study exploring the roots of Václav Havel's thinking. 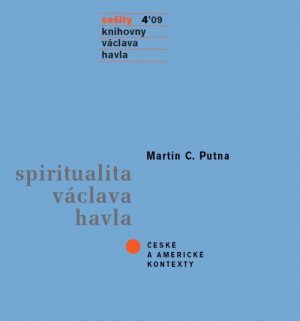 Spirituality of Václav Havel, the new study of Martin C. Putna, which searches for the sources of Havel’s philosophical texts, which almost no one have noticed yet.

Havel’s “nonreligious spirituality”, self-conscious with the word “God” has got its roots in the extremely liberal American Unitarian Church. Its thought environment influenced also - through Charlotte Masaryk - the first Czechoslovak President. From him Putna leads line to Havel through his father, a famous Prague “developer” in 1920s and 1930s, but in his time also Protestant youth activist and (according to his own testimony), a member of the Masonic lodges, Václav M. Havel, who - like Masaryk - was profoundly affected by the American experience.

This line meets other influences. In youth the influence of “non-school thinker” Josef Šafařík, a free companion of existentialism. In the 1980s the influence of a group of philosophers, Kampademie (“Academy on Kampa”) - Zdeněk Neubauer, Ivan M. Havel and others. Kampademie connected the influence of Jan Patočka with Catholicism and with America’s “new science”, partly related to the contemporary New Age movement. Kampademie at the time of Havel’s imprisonment, was Havel’s partner in correspondence dialogue, the world famous output subsequently became Havel’s Letters to Olga from prison. Letters to Olga reflect Havel’s “conversion”. The religious or nonreligious nature of this “conversion” is subsequently discussed.

The work is closed with a chapter on Havel's presidential term, called “From President Thinker to Host of Thinkers”. Extreme burden of presidential role forced Havel to limit his own intellectual creativity. The spiritual dimension of his work is therefore apparent only in a kind of mottos, or shouts, sealing his presidential speeches - and in organisational achievement Forum 2000 and Vision 97 Award: “Although Václav Havel is not an original religious thinker (...) his importance lies in the fact that with the weight of his authority he helps to keep public space open for the least pre-conditioned thinking about spiritual issues.”

The ninety-page book includes a rich photographic material, which is completed - often humorously in an ironic context – by the series of quotations from the works of Václav Havel and the memories of his father, V. M. Havel.