The first part of the book edition of the legendary radio show Hovory v Lánech (Talks from Lány). 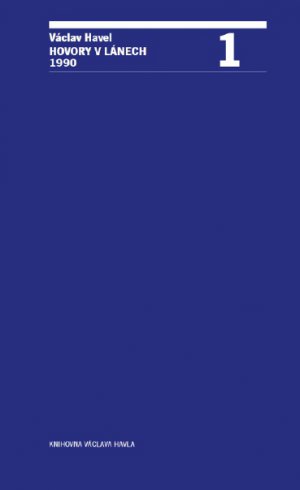 From the very beginning, the decision on publishing a book of radio programs collided with the fact that Václav Havel never considered the speeches and interviews for the media as part of his work. As a writer and playwright, he considered the spoken word to be a specific genre that could not withstand the criteria of well-thought-out formulations of written text. Václav Havel's work is contained in his Writings (Torst 1999, resp. 2008), but other sources are important for understanding his thinking, including interviews for print and electronic media.

The Václav Havel Library therefore decided to establish a completely new series, in which these texts will be published as another important source of knowledge not only of the life and work of Václav Havel, but also of the entire Czechoslovak and Czech society. The editor Tereza Hubáčková, with the help of editors Jan Zelenka and Martin Vidlák, was responsible for the thorough editing of the first volume, and historians Jan Socha and Jiří Suk provided the book with a rich note apparatus. The index was compiled by bibliographer Daniel Řehák. The graphic design was created by Luděk Kubík. The public can compare the resulting book with the original recordings stored in the Archives of Czech Radio or in the Documentation Center of the Václav Havel Library.

The editors of the text, Tereza Hubáčková, Jan Zelenka and Martin Vidlák, write in an editorial note: “Our effort was - not only out of obligatory respect for the author - to preserve the character of Václav Havel's unmistakable style of expression, but also to respect his desire to publish only carefully edited texts. Fulfilling these two requirements at the same time was often very difficult, sometimes impossible - but we believe that the plan was after all carried out successfully (...) Conversations are an authentic source of information and insight into the thinking of Václav Havel, who places everyday politics in "non-political" timeless contexts and also reflects upon topics that other politicians often overlook. The need to comment publicly on the events he has experienced in the past week and which await him in the following week will continue to attract by its naturalness even years later. As a personal confession or a public diary, it is a welcomed opportunity for us to complete our opinions on the social changes of that time. It is understandable that some themes are long overdue and only add period color and plasticity to others. The social atmosphere to which the first volume concerns can already be eloquently characterized by the fact that the name of the state of which Václav Havel was president has changed twice. "