A recording of the legendary production Audience from the Pražský Činoherní klub with Josef Abrhám and Pavel Landovský. 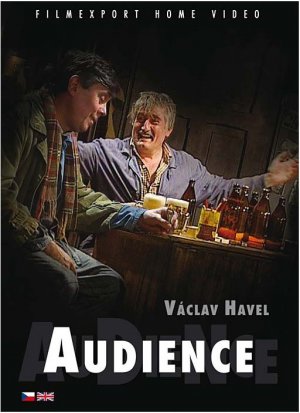 In 1975, Václav Havel worked in the Trutnov brewery as an auxiliary labourer; he could do nothing else. And it was here that perhaps his most successful one-act play, Audience, about the writer Ferdinand Vaněk (Václav Havel) was created. Vaněk´s superior invites him to his office to offer him a deal - he will promote Vaněk to warehouseman, if he in return regularly informs the superior about himself and his activities, so the superior can fill in the State´s police reports. Pavel Landovský excelled in both the gramophone and theatrical version, and the play spread out in a thousand of copies among people. Even before its Prague premiere at the Činoherní klub in January 1990, Audience was performed in at least 13 countries around the world. The recording of the performance directed by Jiří Menzel is complemented by an interesting documentary about Václav Havel's meeting with the creators after the end of the unique theatrical performance.