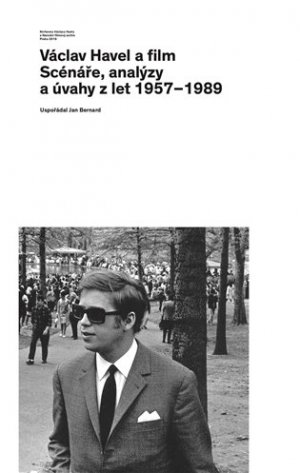 It’s no secret that Václav Havel was drawn to cinema from a young age. After all, he had grown up in a family where film had long been a big part of life – his uncle Miloš may without exaggeration be regarded as the founder of modern Czech cinematography. The antagonism of the totalitarian regime made it impossible for Václav Havel to attend film school, so he established himself, in an unplanned but nevertheless successful manner, as a theatre dramaturge and playwright. Thanks to thorough research, the editor of Václav Havel a film. Scénáře, analýzy a úvahy z let 1957–1989 (Václav Havel and Film: Screenplays, Analyses and Reflections, 1957–1989) has managed to bring together a wide range of different “film” texts: analyses of pictures for FAMU film school entrance exams, cinema-themed articles and reviews that Václav Havel published in arts magazines as a young writer, interviews and for the most part hitherto unpublished screenplays, essays and film outlines.

The volume opens with an extensive study by Jan Bernard of Havel’s activities in the field of film prior to 1989. It delivers interesting, little-known information from Havel’s life, including about his involvement with the prankster group Paleta vlasti (Palette of the Homeland) and his part in creating the scenario for the Expo world’s fair in Montreal. As regards his work as an author, the book includes Vojna (Military Service), a newly discovered screenplay from his FAMU entrance exams; the hitherto unpublished screenplay Heart Beat, written with Jan Němec; Osudná noc  (A Fateful Night), a screenplay based on Vasil Biľak’s Pamětí (Memoirs); and synopses of the unmade pictures Budování zámku (Building a Chateau) and Návštěva (The Visit). The book is supplemented by a filmography, index and above all a large number of unique photographs and documents, many of which are published for the first time.