Selection of interviews with Václav Havel with journalists from all over the world from 1964 and 1989. 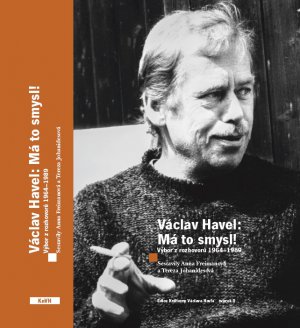 "It is interesting that almost all the debates take place in a calm, friendly atmosphere (with the exception of the hectic year 1989) and that they completely lack a confrontational tone. The interviewer usually does not assert himself, the questions are direct, clear, connected with current events and with Havel's personal life and artistic work. If there is no need to think about conspiracy, Václav Havel answers in the same way - openly and spontaneously. He is not afraid of the personal level, but he keeps his distance. Journalists perceive and respect Havel's natural authority, there are no attempts at investigative probes or revelations. It is also interesting that Václav Havel did not at all think about his image in this period or about how he could impress journalists and consequently the readers. On the contrary, he focused mainly on the precise formulation of the content of the interview.

The interviewee was always helpful, polite and respectful towards the journalists, but most of the time he had the situation firmly in his hands, and he "said" what he wanted. Very often, even in newspaper interviews, it is possible to trace his thinking "out loud", typical for Václav Havel, by which he constantly seeks the meaning of life and his own existence as well as the truth. He never equivocates.

Small Central European Czechoslovakia only exceptionaly appears in the center of world media attention. Interest in what is happening on the borders of Eastern Europe has not been and remains to not be a matter of course. With his work and his defiance of the dictatorship, Václav Havel was able to raise awarness and loudly draw attention to his country, in which the totalitarian regime was treading on human rights and freedoms. The world was (and still is) full of far more interesting historical beliefs and events, and therefore every mention of Czechoslovakia played an important role in the path to democracy. We must thank Václav Havel."

From an introductory word by Anna Freimanová.