A collection of texts by Filip Topol about his legendary and mysterious "friend" Kilián Nedory, which have mostly not yet been published. The first part of the book consists of the short story The Pit and the Wind, the second part is a convolute of features, song lyrics, poems and prose. The book is published as the first volume of the intended three-volume edition of the Filip Topol Archive. 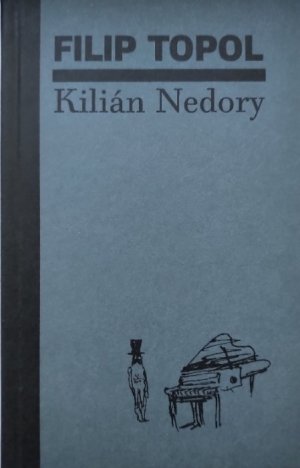 "I'm looking out of the window. The morning is bathed in sunshine. I look out of the window at the Na Rozcestí pub, where I was drunk on rum last week and thought to myself, that something beautiful and sacred was starting for me again. I listen to Laurie Anderson making fun of men with her masculine voice, and I think of the mysterious lava that erupted in me and then began to solidify, which was and is surprisingly a very painful process.

I won't call her anymore because she tortures and just as when I got drunk and called her, yet cold and thinking, strangely impersonally excited and willing to kill or cry, she wasn't there, she's never there when I have to call her because I still have no right to have her, just as I have no right to anything. I simply opened my eyes in the morning to find that something was dying in me, and it was pain accompanied by a taste of rage and an eagle's determination to do something, destroy something, break it or create it, drive it out, no matter what happens.”