The selection of Havel's 25 best essays written since 1965 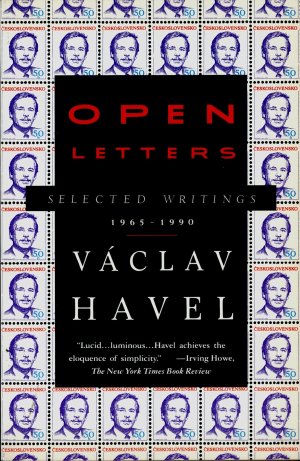 The selection of Havel's 25 best essays written since 1965 as a fascinating chronicle of the development and ideas of the greatly admired Czechoslovakian dissident turned president.

Spanning twenty-five years, this historic collection of writings shows Vaclav Havel's evolution from a modestly known playwright who had the courage to advise and criticize Czechoslovakia's leaders to a newly elected president whose first address to his fellow citizens begins, "I assume you did not propose me for this office so that I, too, would lie to you." Some of the pieces in Open Letters, such as "Dear Dr. Husak" and the essay "The Power of the Powerless," are by now almost legendary for their influence on a generation of Eastern European dissidents; others, such as some of Havel's prison correspondence and his private letter to Alexander Dubcek, appear in English for the first time. All of them bear the unmistakable imprint of Havel's intellectual rigor, moral conviction, and unassuming eloquence, while standing as important additions to the world's literature of conscience.