Prostřednictvím kočky (By Means of a Cat) is a collection of the earliest literary texts by one of the key figures in the New Wave of Czechoslovak cinema in the 1960s (Joseph Killian, Case for a Rookie Hangman), known to the general public above all for his engrossing diary, Deník 1959–1974 (Diary 1959–1974), which was Book of the Year in the newspaper Lidové noviny in 2004. 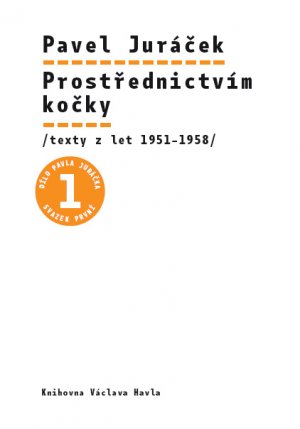 The texts assembled in this collection have never previously been published and are usually referred to as juvenilia. However, they are not mere youthful efforts or the first uncertain steps of a great author: in short stories, short sketches and diary entries, Juráček comes across as masterful, a “ready” and “complete” writer.

Prostřednictvím kočky is being published as the first volume of the Works of Pavel Juráček.