In the Case for a Novice Headsman Pavel Juráček approaches, examines and experiences one of the most intense, most urgent feelings of modern times - anxiety. 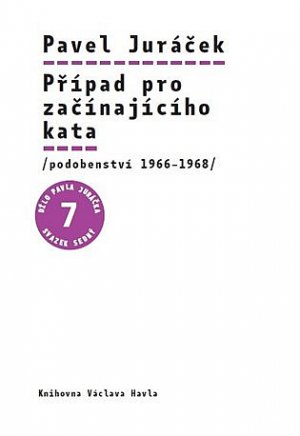 Based on Jonathan Swift's third book of Gulliver's Travels, a canonical novel from the Anglo-Saxon literature from the year 1726, this book shows how little is enough (in this case, to descend from a road closed by an entry ban) to convince oneself that you are pulling shorter half of the rope held by the rest of the world. That no matter how hard he tries, his life takes place and will always take place only in the boundaries set by the society to which he belongs - it will depend on its written and unwritten laws, secrets, failures, on its power. That life´s main mission is to be part of the gears that need and consume him at the same time. And that the only thing one can rely on is their self.

The Case for a Novice Headsman contains all of Juráček's texts, which are related to the preparation and realization of the film of the same name from 1969: synopsis, explanation, filmed short story, two versions of a literary screenplay. For completeness, the volume is supplemented by a comprehensive selection of diary entries, and yet unpublished correspondence and archival documents.